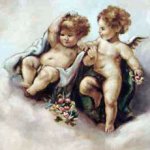 In written records the earliest concept of an angel as a supernatural being is found in Judaism (c.14th century BCE), and has been adopted by other religions, such as Zoroastrianism (c.5th century BCE), Christianity (c.1st century CE), and Islam (c.7th century CE).

Various Old Testament texts, such as Judith’s "His angel has been my safekeeper" and references in the Psalms, point to their existance. This is also clarified in the New Covenant when Christ speaks of the Angels as the " little ones". So a lot of times jewelry with angels was given to, or bought by, people who wanted their own guide, protector and friend.

While angels and demons alike are generally regarded as invisible to human sight, they are frequently depicted as human-like creatures with wings, though many theologians have argued that they have no physical existence, but can take on human form. The traditional Eastern Orthodox term for angels is asomata, "bodiless (ones)". Descriptions of angels in their angelic form mention wings (as in Isaiah, Zachariah, etc.) however, when appearing in human form, they look like men, or as young men. Seraphim are shown in art as having six wings (in accordance with Isaiah 6:1-3), and Cherubim four, having a quadruple face of lion, ox, eagle, and man. Putto are often confused with Cherubim, although they are completely different. This confusion only occurs among English-speaking persons.