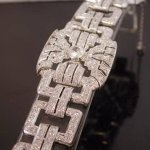 A bracelet is an ornament worn on the wrist or forearm as a flexible band or series of links, in contrast to a bangle, which is rigid. Such ornaments have been worn by men as well as women from earliest times (made of bone, coral or ivory, as well as of metal) and in primitive as well as civilized societies. In the West they are worn mainly by women, but in the East they are still worn by men. Occasionally they are worn on both arms, and two or more at the same time.

Bracelets were worn by the Egyptians, the Greeks, and the Romans, sometimes set with gemstones and coins, and were popular articles of Etruscan jewelry and Anglo-Saxon jewelry. They were used less often in the Middle Ages and the Renaissance, owing to the long sleeves then worn, but their use was revived in the 18th and 19th centuries, many pieces being made with cameos and medallions, and in the Victorian era they were a part of mourning jewelry, often in the form of hair jewelry.

Later, and until today, luxurious examples have been lavishly set with gemstones, but they occur in a multitude of styles and price ranges, including costume jewelry and junk jewelry. They have often formed a unit of a parure. Some bracelets have been made in penannular form and some in the form of a long continuous coil of gold band.