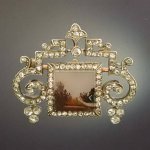 Agate is a variety of Chalcedony (Quartz) that has a variegated colour. The natural colours being:

In intercalated bands distinctly marked from each other (called 'banded agate'), the difference in the bands being due to degrees of transparency and colour and to inclusions of milky layers alternating with layers of Quartz, Jasper, Cornelian, Onyx, Sardonyx, or Sard; or: in cloud-like, moss-like, or dendritic form, due to coloured inclusions or dendrites as in moss agate(also called Mocha agate), cloud agate, feather agate, and mosquito agate.

Most banded agate is artificially coloured; the process, for black or brown and white stones, involves steeping in a solution of honey or sugar, then soaking in sulphuric acid and applying heat so that the carbon is released and enters the absorbent parts, colouring them blackish. This is an acceptable practice if the colour is fast and the trade description correct.

Agate was used extensively in Egypt and Rome, in ornamental pieces and in jewelry such as beads and brooches; in the Middle Ages it was worn as an amulet or talisman.

In many traditions agate is believed to cure the stings of scorpions and the bites of snakes, soothe the mind, prevent contagion, still thunder and lightning, promote eloquence, secure the favour of the powerful, and bring victory over enemies. Persian magi are also known to have prized agate rings in their work and beliefs.

Some followers of Pagan religions also believe agate is a crystal whose powers can be used for love, mental clarity, and good luck in card games.

Shia Muslims often wear an agate ring on the right hand, the stone engraved with the name of Allah, Ali, or the names of the other eleven Imams. It is known as "aqiq" or "agag" in Persian.