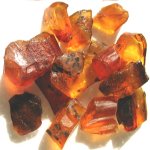 Amber is an amorphous translucent or opaque fossilized natural resin from an extinct variety of pine tree (Pihus succinifera) submerged under the sea some 60,000,000 years ago. It is light in weight, warm to the touch, very brittle, and electrified when rubbed. Its colour covers a wide range, usually from pale yellow and honey to reddish-brown, brown, red, and almost black; but some is whitish. Some pieces show two colours, and these have sometimes been cut as Cameos. The best-quality amber is clear, but some is cloudy, some pieces include stress marks giving a crackled appearance, and some rare specimens contain embedded insects or other organic or inorganic material trapped in prehistoric times.

Amber is soft but tough, hence often intricately carved (especially in China) and sometimes faceted. It has been used mainly for articles with a smooth and polished surface, e.g. beads, finger rings, and bracelets. Many such pieces have been made in Tibet, Mongolia, and Ethiopia (the amber having been transported there); amber was also used for such pieces in England during the Celtic and Victorian eras. It has been used as a talisman and as an ornament in jewelry since the Bronze Age; it was also so used by the ancient Greeks, Romans, Etruscans, Phoenicians, Persians, Byzantines, Vikings, Celts, Saxons, Chinese, and Japanese, and then again in the 19th century in Russia and the Baltic states.

Amber is of two main varieties: (1) sea amber (Succinite), pieces of which are washed up along certain shores, especially the Baltic Sea near Kaliningrad, and also along the shores of eastern England and the Netherlands (from the Lower Tertiary beds buried beneath the North Sea). And (2) pit amber, mined from Oligocene deposits in Burma (called Burmite). Other sources are Sicily (called Simetite), Romania (called Roumanite), Danzig (called Gedanite), and Mexico. Amber boiled in suitable oils changes from opaque to clear and also in colour. In modem times it has been used for tobacco-pipe stems and for cigar- and cigarette holders.

Various substitutes have been developed in recent years. Imitations have also been made using plastic; these are distinguishable by their greater specific gravity, by the fact that in a strong brine solution they sink while amber would float, and by amber's characteristic smell when heated. Amber has also been imitated in glass, sometimes with faked inserted insects. Amber has no connection with Ambergris. The German term for amber is Bernstein, the French Ambre.

Amber is the name for fossil resin or tree sap that is appreciated for its colour and beauty. It is used for the manufacture of ornamental objects and jewellery. Although not mineralized, it is sometimes considered a gemstone. Most of the world's amber is in the range of 30–90 million years old. Semi-fossilized resin or sub-fossil amber is called copal. It can hold insects or even small mammals.

Origin of the term "amber"

The English word amber stems from the old Arabic word anbargris or ambergris and refers to an oily, perfumed substance secreted by the sperm whale. Middle English: "ambre", Old French: "ambre", Medieval Latin: "ambra" or "ambar". It floats on water and is washed up on the beaches. Due to a confusion of terms, Silsilat-al-Tawarikh (travels in Asia), it became to be the name for fossil resin or tree sap, which is also found on beaches.

The presence of insects in amber was noticed by the Pliny the Elder in his Naturalis Historia and led him to the (correct) theory that at some point, amber had to be in a liquid state to cover the bodies of insects. Hence he gave it the expressive name of suceinum or gum-stone, a name that is still in use today to describe succinic acid as well as succinite, a term given to a particular type of amber by James Dwight Dana.

The Greek name for amber was "Electron" and was connected to the Sun God, one of whose titles was Elector or the Awakener. It is discussed by Theophrastus, possibly the first ever mention of the material, and in the 4th century BC. The modern term electron was coined in 1891 by the Irish physicist George Stoney, using the Greek word for amber (and which was then translated as electrum) because of its electrostatic properties and whilst analyzing elementary charge for the first time. The ending -on, common for all subatomic particles, was used in analogy to the word ion.

Heating amber will soften it and eventually it will burn, which is why in Germanic languages the word for amber is a literal translation of burn-Stone (In German it is "Bernstein", in Dutch it is "barnsteen" etc.). Heated below 200°C, amber suffers decomposition, yielding an "oil of amber", and leaving a black residue which is known as "amber colophony", or "amber pitch"; when dissolved in oil of turpentine or in linseed oil this forms "amber varnish" or "amber lac".