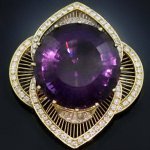 Amethyst is a variety of Quartz that is transparent and crystalline, usually deep purple to pale bluish-violet; the hues are sometimes mingled in the same stone, owing to irregular colour zoning, and some show patches of yellow. Other colours are reddish-mauve (Siberian stones), reddish-violet (Uruguayan stones) or grey-mauve (Mexican stones).

When natural amethysts (not the variety from Madagascar) are heated, the colour changes to pale yellow (sometimes then mistaken for Citrine, but distinguishable by its dichroism); when the heat is increased, it changes to dark yellow or reddish-brown and, when increased further, to milky white. Some Brazilian amethysts when heated change colour to green.

Specimens containing inclusions of goethite or other fibrous minerals are polished as cats eye's. Amethysts have been set in globular or pear-shaped pendants and as pierced beads for necklaces and ear-drops. Some large stones have been embellished by having set into them a design of small diamonds.

Amethyst in folklore and astrology

Amethyst is the birthstone associated with February. It is also associated with the astrological signs of Pisces, Aries (especially the violet and purple variety), Aquarius, and Sagittarius. It is a symbol of heavenly understanding, and of the pioneer in thought and action on the philosophical, religious, spiritual, and material planes. Ranking members of the Roman Catholic Church traditionally wear rings set with a large amethyst as part of their office.

The Greek word "amethystos" basically can be translated as "not drunken". Amethyst was considered to be a strong antidote against drunkenness, which is why wine goblets were often carved from it. Supposedly, when a drunken Dionysus was pursuing a maiden called Amethystos, who refused his affections, she prayed to the gods to remain chaste. The goddess Artemis granted the prayer, transforming her into a white stone; humbled by Amethystos' desire to remain chaste, Dionysus poured wine over the stone she had become as an offering, dyeing the crystals purple.

Variants of the story include that Dionysus, the god of intoxication, had been insulted by a mortal and swore revenge on the next mortal who crossed his path, creating fierce tigers to carry out his wish; the mortal turned out to be a beautiful young woman, Amethystos, who was on her way to pay tribute to Artemis. Her life is spared by Artemis, who transforms the maiden into a statue of pure crystalline quartz to protect her from the brutal claws. Dionysus wept tears of wine in remorse for his action at the sight of the beautiful statue. The god's tears stained the quartz purple. Another variation involves the goddess Rhea presenting Dionysus with the amethyst stone to preserve the winedrinker's sanity.