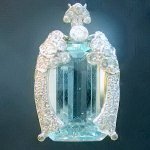 Aquamarine is a variety of Beryl that is transparent and of various shades of blue and blue-green; almost all of the specimens of the preferable sky-blue colour are (since 1920) the result of heat treatment applied to greenish or yellow-brown beryls. The stones are dichroic, and are usually cut as a brilliant or step cut. They resemble the Emerald (the chemical composition is identical, as is the hexagonal crystal form) but the stones are paler and, being less rare, are much less valuable. They also resemble euclase and blue Topaz, from all of which (as well as from glass imitations and synthetic gemstones) they can readily be distinguished.

There are many sources, but Brazil has produced the finest and some very large specimens, e.g. one found in 1919 weighing 110.2 kg. (243 Lb). Some ancient aquamarines were engraved with portraits, e.g. one with a portrait of Julia, daughter of the Roman Emperor Titus. The synthetic stone resembling aquamarine is the blue Synthetic Spinel.

Aquamarine (Lat. aqua marina-, "water of the sea") is a gemstone-quality transparent variety of beryl, having a delicate blue or turquoise color, suggestive of the tint of seawater. It is closely related to the gem emerald. Colors vary and yellow beryl (heliodor), rose pink beryl (morganite), and white beryl (goshenite) are known.

It occurs at most localities which yield ordinary beryl, some of the finest coming from Russia. The gem-gravel placer deposits of Sri Lanka contain aquamarine. Clear yellow beryl, such as occurs in Brazil, is sometimes called aquamarine chrysolite. When corundum presents the bluish tint of typical aquamarine, it is often termed Oriental aquamarine. In the United States, aquamarines can be found at the summit of Mt. Antero in the Sawatch Range in central Colorado. In Brazil, there are mines in the states of Minas Gerais, Espírito Santo and Bahia. Colombia, Zambia, Madagascar, Malawi, Tanzania and Kenya also produce aquamarine.

The biggest aquamarine ever mined was found at the city of Marambaia, Minas Gerais, Brazil, in 1910. It weighed over 110 kg, and its dimensions were 48.5 cm long and 42 cm in diameter.

Aquamarine is the official state gem of Colorado and Missouri.