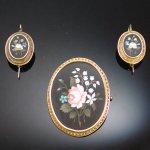 Mosaic (as applied to portable objects, including articles of jewelry, rather than to architectural mosaic embedded in cement in floors, walls, and ceilings of churches and rooms).

An object decorated with many small adjacent pieces (tesserae) of inlaid varicoloured glass or stone ar-ranged to form a picture or design. For articles of jewelry, the mosaic was usually made in the form of medallions set in brooches, pendants, necklaces, finger rings, ear-rings, parures, etc.

Such work has been done principally in Italy, some being executed with skill and artistry in the 19th century, but many pieces being made in recent years as tourist souvenirs, with large tesserae of stone or glass that are roughly set, and sometimes with some painted portions. Pieces of good quality were mounted in gold frames, including some made by the Casa Castellani in Rome. The fashion for mosaic jewelry in England was mainly in the period 1820-60.

Mosaic work in jewelry was of two types:

In both types the decorative motifs were often pictorial views of ancient ruins or famous buildings, and in the 1820s Egyptian motifs, but by the mid-l9th century the usual subjects had become more sentimental, e.g. flowers and pet dogs. The Florentine mosaic was imitated in Derbyshire, England, in the ate 18th to early 19 century, by using local black marble and feldspar.