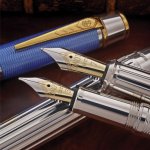 By the early nineteenth century, Thomas de Ia Rue had built up a veritable color printing and paper production empire encompassing fields as diverse as playing cards, postage stamps, bank notes and stationery. The year 1880 marked an important stage in the development of the family business. Just when Thomas Andros de Ia Rue, son of the founder, had taken over the running of the firm, it was awarded the monopoly to print all British postage stamps. With this enormous guaranteed income behind it, De La Rue and Sons decided to round out its activities in the stationery and printing fields, where it already had an excellent distribution network in place, by moving into fountain pen making.

The early models, based on patents registered by a certain T.R. Hearson, were rather unusual and somewhat complicated. The first De La Rue pen to resemble the pens other manufacturers of the time were producing was a hard rubber safety with a gold nib. It appeared in the catalogue of Harrods, the famous London department store, and by sheer chance was called the Pelican (the Pelikan trademark, the heraldic symbol of the Wagner family, had already been registered in Germany, but at that time the company produced only colors and paints; the first Pelikan pen appeared in 1929).

It was only in the family's fourth generation, with Evelyn Andros de La Rue at the helm, that the company's pen production really began to take off. Introduced in 1905, the success of the new Onoto, as it was christened, with its original plunger type mechanism more than justified the company's huge £50,000 investment in advertising (the name itself had no special meaning; it was chosen because it was easy to remember and sounded the same in any language). The main reason for the pen's success was that its piston-filling system was more practical and up-to-date than the standard eye-dropper mechanisms still being used by other companies. The original Onoto cost more than £10, but cheaper models like the Empire, Hermit and Pent ago were also introduced. The commercial success of these pens (which made De La Rue Britain's leading pen manufacturer) was nicely timed because in the meantime it had lost its lucrative stamp printing contract with the Post Office.

The company's wartime advertising was, naturally, patriotic in tone ("the All-British pen"), and it copied its American rivals in its armed forces production by introducing soluble ink pellets to replace less practical ink from a bottle. De La Rue became a public company after the war, but it allowed itself to be overtaken by Mabie Todd's superior image and technical innovation. Its plated Onotos, for example, simply could not compete with the more luxurious materials and decoration of the rival Swans, and the company made the technical error of relying for too long on its piston-filling system. It continued using it until 1924, when all other manufacturers had already been using the more successful lever-filler systems for ten years or more. This meant that the mass-produced Onotos of the late 1920s and early 1930s were basically the same as the Parker Duofolds, but lacked the distinctive personality of the American pen. However, De La Rue continued to hold its own in the middle-price market, supplementing the attractive marble colors of its basic range with beautiful upmarket silver overlays. Lacking anything really new to say about the Onoto, the company's advertisers limited themselves to describing it rather snobbishly as "The Pen".

The company's image was given a face-lift around the mid 1930's with the introduction of a specially treated plastic for the barrel and cap in what we would now call a minimalist design of alternating opaque and transparent layers. This new process allowed for a much more imaginative range of color combinations and optical effects than those Parker was using for its Vacumatics of the time. The De La Rue and Onoto pens of this period (some had special names like Magma, Minor or Dainty) are now perhaps those most sought after by the average collector. More discerning collectors with more money at their disposal will go for the costlier versions like, for example, the silver-plated model used by King George VI signing a visitor's book. The company never succeeded in the postwar period. The last model it produced before closing in 1958, the K Series, was an imitation of the Parker 51.