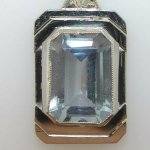 A spinel is a gemstone that is found in a wide range of colors and shades (colorless spinel being rare), of which the most valuable spinel is that which resembles in color the red ruby. In general the stones should preferably be designated as 'spinel' preceded by the particular color, and not by the often-used misnomers such as:

Some varieties have unambiguous and accepted names, such as:

The various spinels can be distinguished from other stones that they resemble in color by their single refraction and lack of dichroism, but to distinguish the garnet depends on different refractive index and specific gravity. Spinels are usually faceted in the brilliant cut, step cut or mixed cut.

A synthetic spinel has been produced, examples being of blue and other colors.

The largest known spinel is a polished pebble weighing 500 carats (in the Iranian crown jewels).