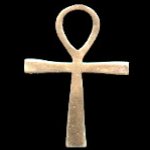 This magic knot or cross, known as Nem Ank, 'the key of life', was often used in the iconogryaphy of opposites. The loop over the tau-cross could stand for the Sun, for Heaven and Earth as the macrocosm and for man as the microcosm. It is generally interpreted as a symbol which expresses the reconciliation of opposites or the integration of active and passive qualities. This is amply confirmed by the fact that, when recumbent, the ankh symbolizes both male and female sexual attributes in precisely the same ways as the very realistic Hindu depiction of a hermaphrodite standing on a lotus flower.

Champdor gives a more traditional interpretation as: the symbol of the millions of years of the life to come. The loop is the perfect symbol of what has neither beginning nor end and stands for the soul which is eternal because it has sprung from the spiritual essence of the gods. The cross represents the state of trance in which the neophyte struggled or, more precisely, the state of death, the crucifixion of the chosen victim, and in some temples the priests used to lay the neophyte on a bed shaped like the cross...

The possessor of the geometric key to the hidden mysteries, of which the symbol was this very looped cross, was able to open the gates of the Kingdom of the Dead and penetrate the hidden meaning of eternal life.