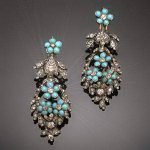 The turquoise stone is a gemstone that is bluish, greenish-blue or grayish-green. The best quality is uniformly intensely sky-blue. You can compare the color of the mineral with the "forget-me-not" flower or an egg of a song thrush.

On the stone you have decorative ways of black veins from the mother stone. Turquoise is usually opaque, hence often cabochon cut, but occasionally faceted, or some flat pieces are engraved.

The turquoise stone has a waxy luster and takes a high polish. It is a porous stone and sometimes it is often protected with a plastic film. It shows double refraction.

The following is from: An Illustrated Dictionary of Jewelry, autor: Harold Newman, publishers: Thames and Hudson

A gemstone that is bluish, greenish-blue or greyish-green, but the best qualityis uniformly intensely sky-blue; some less valuable specimens are speckled with limonite or with dark markings from the surrounding mattrix (called 'rock turquoise'). Turquoise is usually opaqsue, hence often cut en cabochon, but occasionally faceted; some flat pieces are engraved in Eastern countries with gilt characters.

During the 19th century brooches and pendants were often set in pavé style with small cabochon turquoises; and turquoises are often used as inlay to decorate silver jewelry in Mexico, Tibet, and Iran, and some made by American Indians.

Turquoise has a waxy listre and takes a high polish. It is porous and sometimes discolours, especially from grease; hence it is often protected with a plastic film. It shows double refraction. Some deeply coloured stones become pale when exposed to sunlight and lose value; the colour can be temporarily restored (and sometimes is, to promote sales) by burying the stone in damp earth or by immersion in ammonia.

Pale turquoise is sometimes stained dark blue, but this can be detected by a drop of ammonia (turning it greenish) or by a surface scratch. Sometimes good-quality turquoise that retains its colour is called 'old rock turquoise', and an inferior grade 'new rock turquoise'. Turquoise was formerly called 'Turkish stone' (not actually from Turkey, but Persian stones shipped from there), hence the present name from the French pierre turquoise.

The main sources for centuries have been the Sinai Peninsula and the Nishapur region of Iran (Persia). Some other stones resemble turquoise, e.g. odontolite, lazulite, haüyne, sodalite, variscite, and wardite; and chalcedony and howlite are sometimes dyed blue to imitate it, as are glass and ivory. A reconstructed stone is made by bonding small pieces of true turquoise. A plastic imitation of low density is now being made.