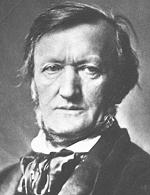 A composer of supreme influence in the progresson of musical history, Richard Wagner was born in Leipzig in 1813 into a blue-collar family. His father a police clerk, died when Richard was six months old, and his mother soon remarried, to an actor and playwright named Ludwig Geyer (some historians believe that Richard was actually Geyer's biological son; evidence shows that Wagner himself might have believed this). As the boy grew up, he became fascinated by literature, particularly the plays of Shakespeare. As he immersed himself in books - even trying his hand at writing tragedies - he began piano lessons; but, unlike many other prominent composers, he never became proficient on this or any other instrument.

Through his teens, Wagner was increasingly attracted to composing. By the time he was nineteen, several of his works had received performances. At twenty, he landed a job as the chorus master for the Wurzburg Theatre. In quick succession, he moved on to new positions in Magdeburg, Königsberg and Riga. He also started to write operas. He married Minna Planer, an actress, and began to write an opera based on the novel Rienzi, Last of the Tribunes. It took Wagner several years to get a production of his opera, and during this time his marriage foundered, in part due to his bad money management. He finally got a production of Rienzi in Dresden in 1842, and the opera was a success. This led to a new project, The Flying Dutchman (1843), which was also quite a hit. Its success led to an appointment as conductor at the court of the King of Saxony. Until the revolutionary uprising of 1848, Wagner stayed at the court, writing and producing operas - including Tannhäuser and Lohengrin.

Because of Wagner's highly visible role in the uprising, he had to flee to Switzerland near the end of the 1840s; while in exile, he concentrated on writing essays which delineated his theories on musical drama. He also began work on his magnum opus - a monumental cycle of four musical dramas collectively titled Der Ring des Nibelungen (The Ring of the Nibelungs). This cycle - comprised of Das Rheingold, Die Walküre, Siegfried and Die Götterdämmerung - took 22 years to complete, and stands as one of the most remarkable and profoundly influential achievements in Western music.

During the long period of work on The Ring, Wagner's life went through some profound changes. He wrote perhaps his most popular opera, Tristan und Isolde (1856-59), and another major work, Die Meistersinger von Nurnberg (1862-67). In 1864, the King of Bavaria, Ludwig II, brought the now-famous composer to Munich to provide financial support. There Wagner fell madly in love with a daughter of Franz Liszt, Cosima von Bulow, who was married at the time to one of Wagner's associates. Eventually the two lovers were married, and they began a project which would prove Wagner's biggest legacy to future generations - the building of an opera house exclusively devoted to the performance of his works. Set in the Bavarian town of Bayreuth, the Festspielhaus was the location for the first complete performance of the Ring cycle, in 1876. This was probably Wagner's crowning achievement - to have the most important vocal work of his time performed in an opera house of his own design.

After the premiere of the Ring, Wagner finished only one more major work - Parsifal (1882). He became ill later that year, and died in February of 1883. Wagner wrote more than operas and musical dramas; he was also a master of choral works, orchestral and solo vocal music. Probably his best-known instrumental work is one he wrote for Cosima's birthday in 1870 - the Siegfried-Idyll. It is for his operas and staged works, however, that he will forever be revered. Wagner's philosophy of musical drama boiled down to the concept of Gesamtkunstwerk, or universal artwork. He held that music in a dramatic setting was best utilized to reinforce dramatic content and expression; he also designed his librettos to address the philosophical issues that he considered vital to society - the tension between good and evil, between physical and spiritual experience, between selfishness and redemptive love of another. His operas were the first to develop the technique of Sprechsingen, or singing speech, in which musical lines are crafted to illuminate natural speech patterns. He did not invent the leitmotiv, but he did more to develop it than perhaps any other composer in history. This practice of using one melodic fragment or theme to identify a given character (or situation) was made more consistent and vivid than it had been before, and Wagner is considered the master of this dramatic technique. He is now acknowledged as the supreme master of German opera, and one of the most progressive and headstrong composers in modern history.

Tannhäuser revolves around one of the legendary knight minstrels (Minnesingers) who were said to have gathered in the great hall of the Wartburg castle (near the Venusberg--Hill of Venus) for tournaments of song. Tannhäuser, having grown weary of his life on earth, has taken refuge in the magic spell of Venus, Goddess of Love. Tannhäuser insists on returning to Earth despite Venus' threats and once again meets his former beloved, Elisabeth. He sings the famous aria, Dich, teure Halle. Also from this opera are the well-known Pilgrim's Chorus, Elisabeth's Prayer, and O, du mein holder Abendstern (the song to the Evening Star). Here death rules, as in many operas, and Tannhäuser and Elisabeth die, her death being his redemption from his sins.

The chorus to be performed is the entrance of the knights and nobles into the great hall for the song tournament.

This article is written by William Ramsey, last updated: October 25, 1996